The Oklahoma Legislature recommended impeachment of President Obama (and several other federal admins) because The White House distributed guidance to public schools about how to accommodate transgender students with regard to facility usage, such as bathrooms and locker rooms. In response to the White House issued directive allowing children to use the facilities of the gender with which they identify, the Oklahoma Legislature introduced SB 1619.

Authored by Bingman (R-Sapulpa) and Hickman (R-Fairview). “Schools; accommodation of facilities; codifcation; effective date. Emergency.” A fresh approach for identifying and segregating transgender students. “It being immediately necessary for the preservation of the public peace, health and safety, an emergency is hereby declared to exist, by reason whereof this act shall take effect and be in full force from and after its passage and approval.” Prohibiting the use of a certain facility for compliance with a federal guideline… and transgender suppression are an “emergency” according to the Oklahoma state government…. “a student enrolled in the school district or the parent or legal guardian of a student enrolled in the school district may request a religious accommodation.” Trans-free facilities must be provided according to this bill co-authored by 20 elected officials. (Bill Link) (Article Link)

Co-Sponsors of the BATHROOM Bill, SB1619:

Authored by Dahm (R-Broken Arrow) and Brumbaugh (R-Tulsa), would make it a felony for physicians to perform abortions in the state, a direct violation of Roe v. Wade. The measure passed the Senate by a vote of 40-7 and 59-9 in the House. Message received: “Women deserve DIY abortions. Back to the stone age.” (Article Link)

Authored by Jolley and Hickman (R-Fairview), the School District Empowerment Act, would allow school districts to opt out of state educational requirements, including … 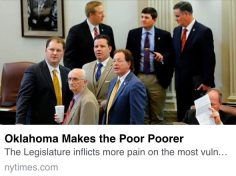 the earned-income tax credit nonrefundable so those who don’t pay taxes won’t get a refund; estimate would generate $28.9 million for the state budget. “Income tax credits; limiting time period during which certain credit is refundable.  Effective date” This bill would impact poor families by potentially taking a state tax benefit away. The NY Times published an article about this, click the image to read their story. “Oklahoma Legislature … cutting an average $147 a year from the income of 200,000 households.”

Authored by Martin (R-Norman) and Standridge (R-Norman), which would raise fees on funeral homes and institute a true “Death Tax” by creating a new fee on the filing of death certificates. Directs the Oklahoma Funeral Board to set all fees. “Professions and occupations; Funeral Services Licensing Act; modifying fees; effective date.”

Authored by Mulready (R-Tulsa) and David (R-Porter). Republicans come with HB-1566, which would privatize Medicaid and balance the budget on the backs of “non-institutionalized aged, blind, and disabled persons.” The bill directed the authority to request proposals from independent vendors who could coordinate health care for aged, blind or disabled people currently enrolled in SoonerCare, the state’s version of Medicaid.

Authored by Jolley (R-Edmond) and Sears (R-Bartlesville), aka the tobacco tax. A proposal to raise the tax on cigarettes by $1.50 per pack.

Authored by Jolley (R-Edmond) and Sears (R-Bartlesville): caps the total amount of statewide credits manufacturers will be allowed for capital investment or new jobs for tax years 2016 through 2018 at $25 million annually; would generate an estimated $14 million annually.

Authored by Caldwell (R-Enid) and Ford (R-Bartlesville): Revenue and taxation; creating the Retail Protection Act of 2016; sales tax; effective date, attempts to require many online retailers to add that tax to the purchase price.

Authored by Dahm (R-Broken Arrow) and Billy (R-Purcell): State is begging for handouts. It creates a way for Oklahoma taxpayers to check a box on their state tax refunds and specify an amount of their refund (or other monies) to be donated to the state’s general revenue fund. (Article Link)

Authored by Bingman (R-Sapulpa) and Hickman (R-Fairview). State government; modifying space in State Capitol under management and control of Legislature; modifying duties of certain committee; repealer. This would require architectural drawings be made of the Capitol for the establishment of vending areas.

Authored by Jolley (R-Edmond) and Sears (R-Bartlesville). Income tax credit; limiting time period during which certain credit shall be allowed, which relates to income tax credit for expenditures incurred by certain contractors.

Authored by Jolley (R-Edmond) and Sears (R-Bartlesville): would authorize OMES to certify any funds remaining in the cash-flow reserve fund in December as available for transfer and appropriation; would save an estimated $125 million, would allow the state to roll over money in the Cash Flow Reserve Fund from year to year.

About scottm 31 Articles
Scott Mellgren is a writer, photographer, filmmaker, architect and musician. His interests are as varied as this website.